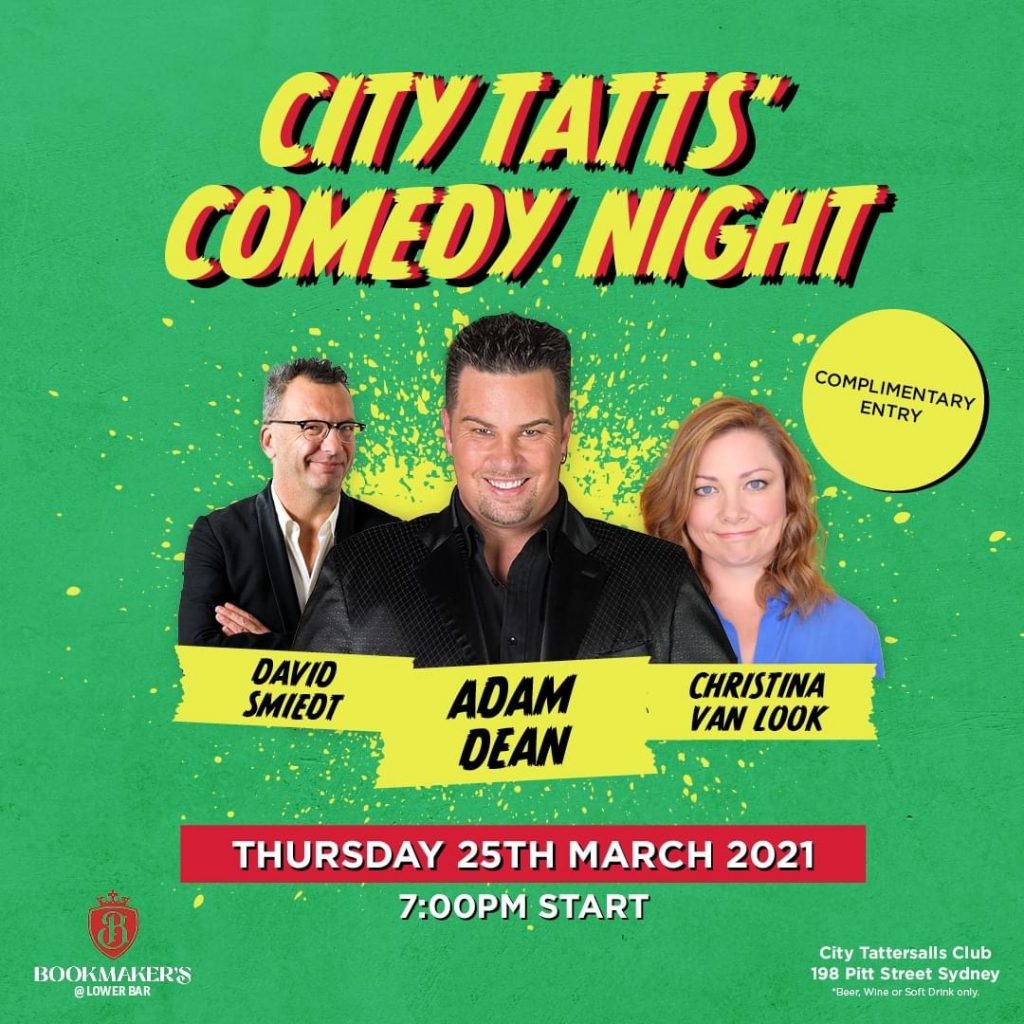 Come check out the hottest new  comedy night to hit the Sydney CBD. Adam Dean will be headlining the event. David Smeidt and Christina Van Look will also be taking the stage in what promises to be a comedy extravaganza.

This is a free entry event so the only real thing you have to ask yourself is where will you be on Thursday, 25 March 2021, the answer is City Tattersalls club.

7pm show time. Get in early and enjoy some delicious food and fabulous cocktails!

Adam Dean : Adam Dean is considered one of Australia’s leading entertainers in the field of comedy, magic and illusion.

Performing both in Australia and internationally, Adam Dean has showcased in conjunction with some of the best magicians and comedians across the globe including 30 different countries and onboard 16 international cruises.

His sensational performance leaves those who witness his show astounded and marvelling at the execution of his unique trickery, illusion and sleight of hand.
Entering his 20th year as a full-time professional Corporate Entertainer, Adam Dean is not your typical “rabbit out of the hat” magician. He stays on the cutting edge of technology and magical effects to ensure his show is always new and exciting to every audience.

David Smiedt: David Smiedt has been delighting audiences around the country and overseas with his brand of warm inclusive comedy for over six years and is now one of Australia’s finest comedian MC’s and corporate performers. David is a regular on television shows such as Mornings with Kerri-Ann Sunrise, The Today Show, Ready Steady Cook and having appeared on Stand Up Australia he is also the author of six humorous books.

He also is a writer for a wide range of magazines including Elle, Cosmopolitan, Men’s Health, Women’s Health, Body & Soul and Vogue where he specialises in a humorous take on style health trends and celebrity profiles.

Christina Van Look: Christina Van Look burst onto the Sydney comedy scene six years ago and continues to delight audiences from Melbourne, New York, London and Toongabbie. Her humour varies from hilariously self-deprecating to bitingly sardonic but her punchlines are delivered with a relaxed smile that makes her a favourite wherever she performs. Christina is renowned for her rapid-fire jokes about celebrities (Kim K would sue if she could actually understand the joke), parenting as a competitive sport and why you need to visit a sex shop at least once in your life.